Chris Voss Podcast – As a City on a Hill: The Story of America’s Most Famous Lay Sermon by Daniel T. Rodgers 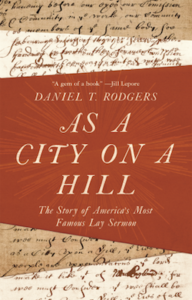 The Chris Voss Show Podcast – As a City on a Hill: The Story of America’s Most Famous Lay Sermon by Daniel T. Rodgers
Daniel Rodgers Webpage

“For we must consider that we shall be as a city upon a hill,” John Winthrop warned his fellow Puritans at New England’s founding in 1630. More than three centuries later, Ronald Reagan remade that passage into a timeless celebration of American promise. How were Winthrop’s long-forgotten words reinvented as a central statement of American identity and exceptionalism? In As a City on a Hill, leading American intellectual historian Daniel Rodgers tells the surprising story of one of the most celebrated documents in the canon of the American idea. In doing so, he brings to life the ideas Winthrop’s text carried in its own time and the sharply different yearnings that have been attributed to it since.

As a City on a Hill shows how much more malleable, more saturated with vulnerability, and less distinctly American Winthrop’s “Model of Christian Charity” was than the document that twentieth-century Americans invented. Across almost four centuries, Rodgers traces striking shifts in the meaning of Winthrop’s words―from Winthrop’s own anxious reckoning with the scrutiny of the world, through Abraham Lincoln’s haunting reference to this “almost chosen people,” to the “city on a hill” that African Americans hoped to construct in Liberia, to the era of Donald Trump.

As a City on a Hill reveals the circuitous, unexpected ways Winthrop’s words came to lodge in American consciousness. At the same time, the book offers a probing reflection on how nationalism encourages the invention of “timeless” texts to straighten out the crooked realities of the past. 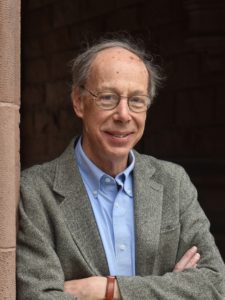 Dan Rodgers is the Henry Charles Lea Professor of History Emeritus at Princeton University. He is a prize-winning teacher and the author of six prize-winning books on the history of American ideas, arguments, assumptions, and culture. His Age of Fracture, which won the coveted Bancroft Prize in American history in 2012, not only helped put the word fracture on the map as a description of the last forty years of American history but showed how the very idea of “society” began to fall apart after the 1970s. His latest book, As a City on a Hill, available in paperback this fall, hones in on the history of one of the most iconic phrases in recent American politics: the claim that ever since their beginning Americans knew that they were destined to be a model to the world. The book uncovers the myths behind that assumption. It shows how a 17th century document’s words were lost, how they were found again, and how they were filled with radically new meanings. Finally, and most importantly, it asks what the phrase “city on a hill” ought to mean for us now.